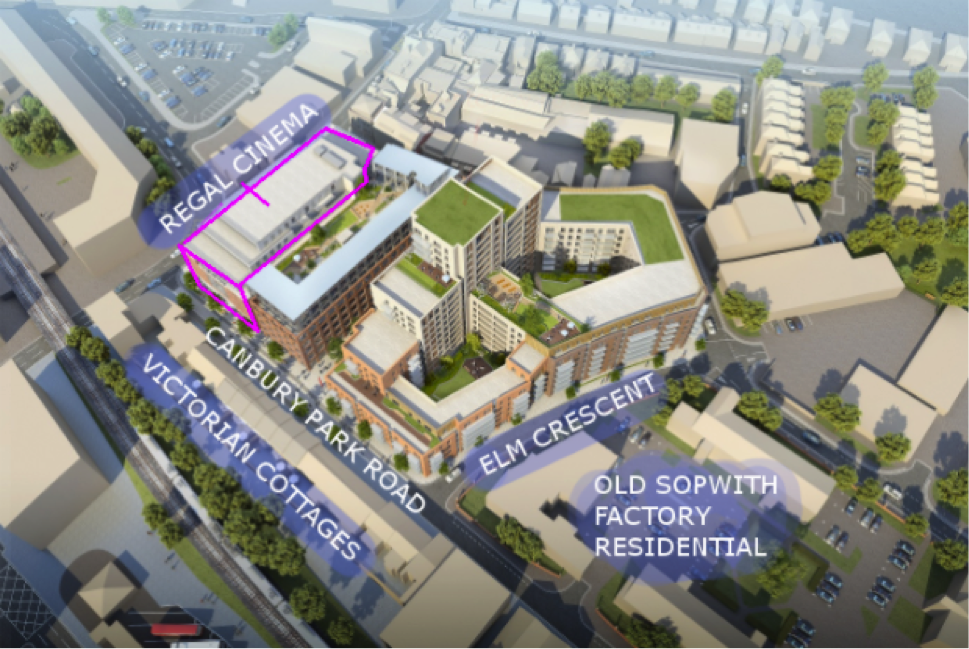 CNM Estates has submitted a proposal for what amounts to a mini-TOPO, right behind the Regal Cinema (which itself is an on-going CNM project, still shrouded in scaffolding awnings after over a year), on the site of the existing Canbury Business Park (CBP). CBP at present is a low-level, unassuming collection of light industrial buildings and office accommodation, with a maximum height of four storeys, situated on the site of a former Sopwith Aviation factory. It is bordered by Canbury Park Road to the south, Elm Crescent to the east, and Cowleaze Road to the north.

Directly opposite the CBP, across Elm Crescent, lies Sigrist Square. Sigrist Square is a low-level residential development that retains the original facade of the main Sopwith office building which originally stood there. This facade has been retained, whilst further old factory buildings behind it have been replaced with five three-storey residential blocks surrounded by a combination of private parking, large grass lawned areas, planted beds and trees. One whole side of Sigrist Square runs along Elm Crescent, and the windows of the flats in this block look out directly over CBP. At the moment they enjoy a considerable amount of sunshine/daylight owing to the low profile skyline of CBP, with the rear wall of the Regal Cinema building just visible in the background.

Community: as a resident group, we have to start with community involvement. Let’s be clear, there was next to no community involvement in this development. As we have said before ‘a staged public exhibition and a post-it note afterwards’ does not constitute community involvement. The proposals at hand are a total non-starter and a missed opportunity. Both CNM and Kingston Council should be ashamed of themselves for not demanding a better process well before the public exhibition takes place. Lessons could have been learned from the mishandling of previous recent proposals in the town centre: people who have the power to vote the RBK administration in and out deserve a proper voice and deserve to be part of properly inclusive consultation processes. Here we are, in November 2017, with a looming deadline on 7th December, and residents once again find themselves having to plough through hundreds of pages of planning documents to understand the whys and wherefores of this unsympathetic proposal.

Planning: this site does not fall within the area covered by the North Kingston Development Brief (NKDB) – so why is it all of a sudden the target of a major planning application? Indeed, the proposal claims that it seeks to become a ‘destination’, and a ‘landmark’ or ‘gateway’ - “creating a genuine destination whilst responding to the local community” . We agree that this may be a prime area for redevelopment, but this is a Locally Significant Industrial Site (LSIS), within the Kingston Town Centre area. It is also a site of Archaeological Significance and also in the line of one of the Protected Views of London. It is adjacent to the former Gala Bingo Hall, formerly the Regal Cinema, which opened in 1932 and is a Grade II listed building. And it occupies the site of a former Sopwith Aviation factory, a significant part of the rich aviation history of Kingston. Surely this site deserves more than just a gimmicky sculptural solution (see images below)?.

Developers;  Given the current state and extremely slow development of the Regal Cinema; the sudden collapse of the Tolworth Tower project with the receivers called in; the never-ending work on the Kingston Plaza area and poor developments around, it is natural for some of us to question the prospect of yet another major project in the hands of CNM. Can someone from the Council or CNM clarify who owns the site as we could not see any clear documentation on the application site?

Design: the design scheme bears no resemblance to the residential zone it claims  to ‘blend in’ with. Its extreme bulk, massing & density has all the hallmarks of repeating the mistakes of the past. Residents know that higher-density neighbourhoods need to be carefully planned and therefore the design process should be more open, transparent and inclusive. There are some important questions to ask. As the Kingston-upon-Thames Society – one of the 4 key stakeholders invited to preview the plans in advance  – put it:

“The ‘elephant in the room’ - as always - is the extent to which the site is densely packed with new buildings, & is again in our opinion over developed and too tall. As always these aspects were very much obscured in the presentation that we were shown. 12 storeys [plus a ground floor of another 2 storeys] making an actual total of 14 is excessive for this part of Kingston which is presently only between 2 & 4 storeys high, and competes with those sites designated as so called “landmarks” in the Eden quarter ie the TOPO & the Eden Walk development, never mind anything else on the Surrey House site. We are not aware of any such designation for this site, and would expect to see something far less dominating on the skyline.”

Transport: Why are the developers allowed to play down the chronic transport issues of the area?  The developer’s assessment of roads and transport links in their poorly prepared Design and Access Statement suggest that the surrounding ‘roads are extremely well connected and second to best rating.’ Are they serious? In fact, another of their documents directly contradicts this - the Suitability Assessment Report prepared as part of the proposal makes repeated reference to the small-scale nature of the roads surrounding the CBP site:


We all know how congested the roads in the vicinity are and one short trip to Kingston Town Centre, especially during the rush hour or the Christmas shopping season, demonstrates  how bad the situation is. There is also the poorly-serviced Kingston Rail station. South Western Railways have proved to be as bad as their predecessors and we seem to be stuck with their increasingly infrequent and unreliable service for the foreseeable future.

Education: why was the future of the existing Educare Small School on Cowleaze Road not addressed AND RESOLVED before the plans became formalised? We understand that resolution of this significant problem has been attempted as something of an afterthought, with all the work on the main body of the proposal having been completed And why is the provision of  a new medical centre on the site linked to the future of this school? A development of such scale should be expected to give proper consideration to both school and medical centre, without trade-offs between the two. (See Change.org petition by Andrea Craig - Canbury Ward and Dr Janice Gravett on behalf of the Trustees of Educare School)

Wishful (or deliberately misleading) thinking: why is CrossRail2 still allowed to be quoted in developers’ proposals? We all know that CR2 is currently as far into the future as space shuttles to Mars! There is absolutely no further commitment to CR2 from central government at the moment and the Chancellor failed to commit to this major infrastructure project in his most recent Budget. 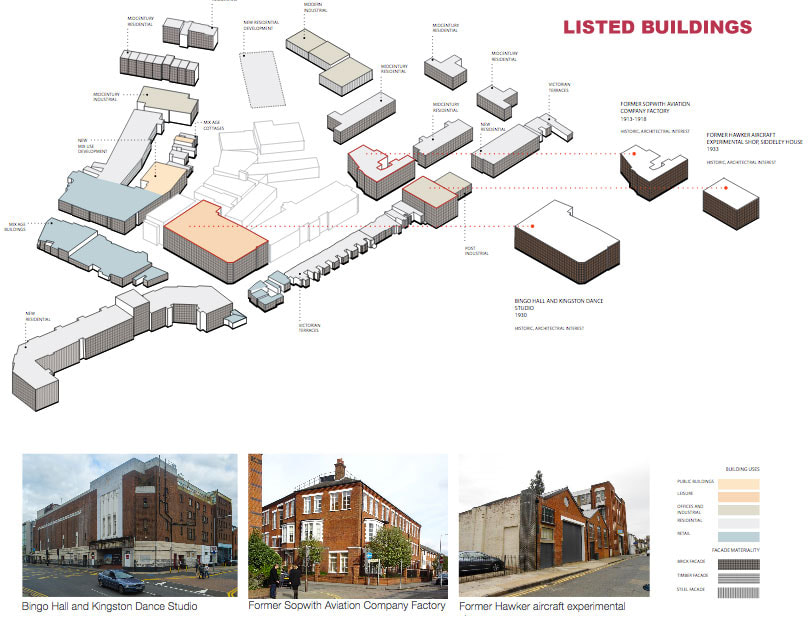 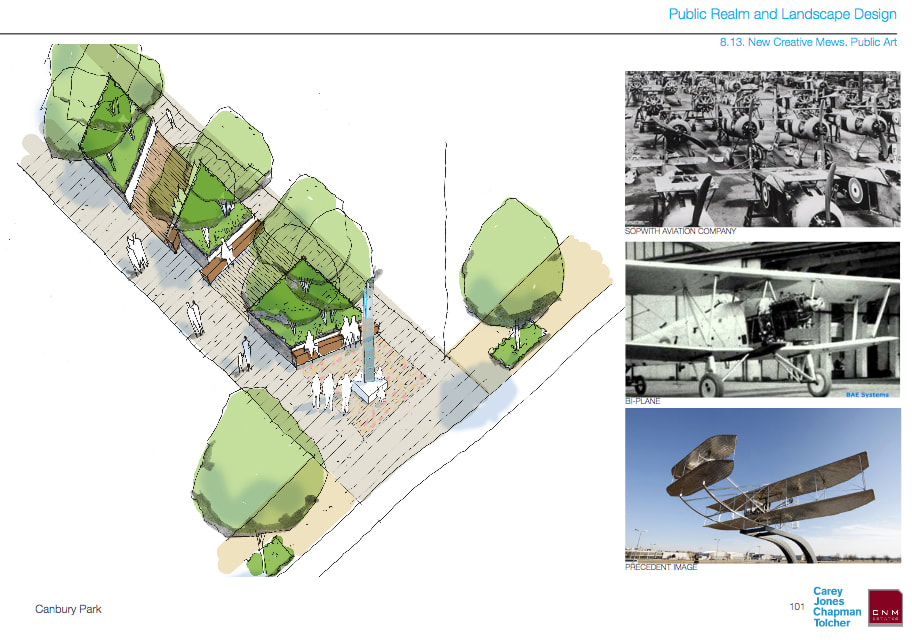 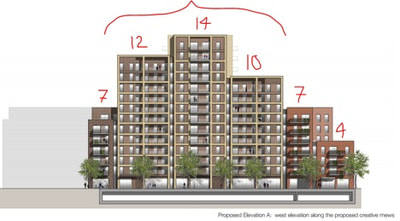 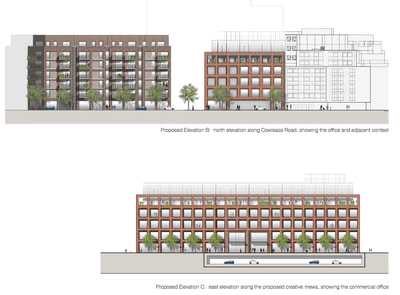 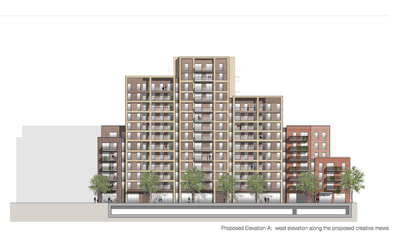 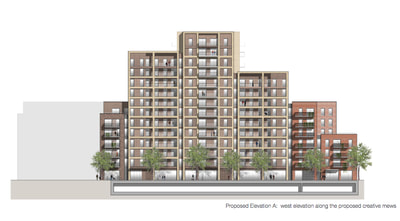 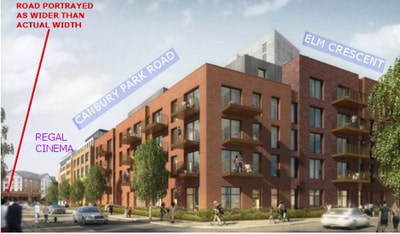 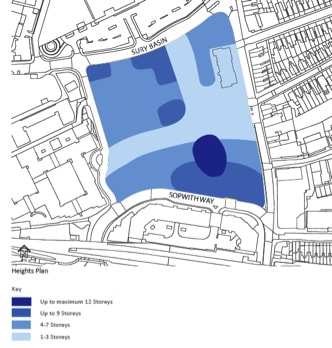 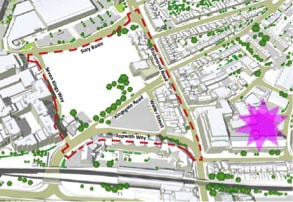 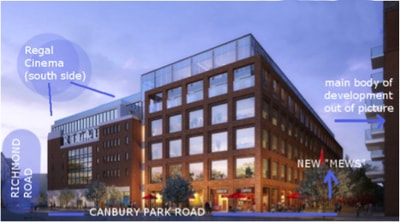