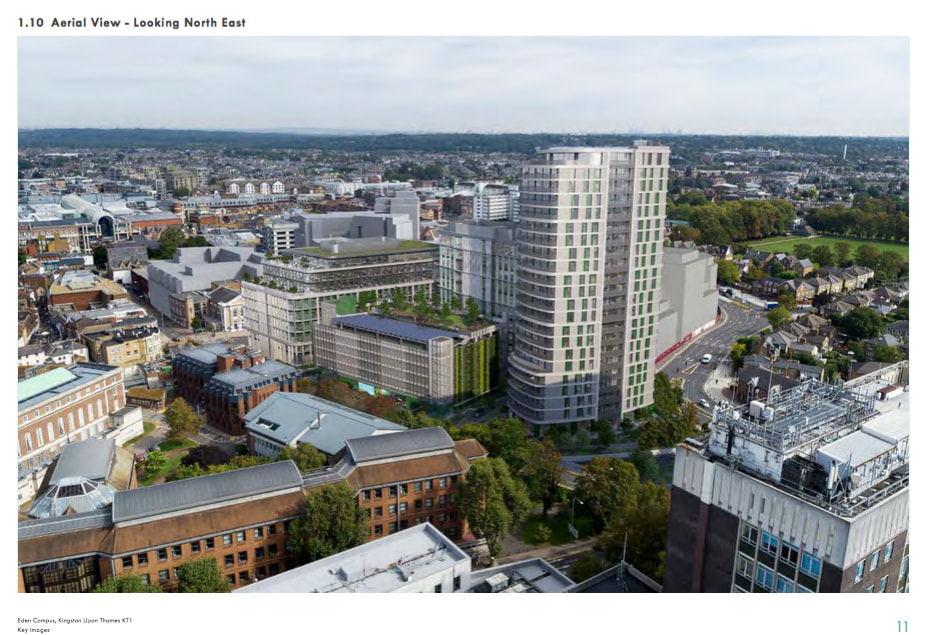 Applicant Name Hathaway Opportunity Fund General Partners
Standard Consultation Expiry Date: Wed 04 Nov 2020 BUT we were told any representations received up until a decision is taken will be taken into consideration in the assessment of the applications.
Statutory Expiry Date Tue 05 Jan 2021

What to do next:
All Kingston residents are urged to view the digital exhibition for the proposed redevelopment of the Eden Campus for themselves at:-Eden Campus Developers Consultation Site

Please do not lose this opportunity to let your views be known to both the developers and to your local councillors (contact details below). The Council should provide unambiguous guidance to the developers prior to any application being submitted.

The Leader of Kingston Council
Caroline.Kerr@kingston.gov.uk

1.    The period between the two consultations were too close to make any meaningful adjustment to plans. (The first started on 29th June, the second on 3rd August, barely 4 working weeks between them.) The consultations were pointless  and people who reserved their comments for the final exhibition were very disappointed with the lack of progress. This is the real reason why most reserved their opinions in the first one and opposed the proposals in the second consultation

2.    In terms of usability, the exhibition website designed for the consultation was very poor. The image carousel did not work or was too slow on some handheld devices. The comments page did not work on some phones. Most downloaded PDF version in order to “view” the site but probably did not try to comment via email. People did not spend more than 2 minutes and 55 seconds (according to the Applicant’s report) because there was really not much to see.

3.    Both consultations lacked verified key views. In particular, the absence of tall buildings angle was notable in the limited number of visuals provided. This was demonstrably misleading.

4.    There were no hard copies for anyone who was not able to view and/or download materials on line

5.    There were no webinar or Zoom-type arrangements for residents to “meet the Architect/Developer”. The text-based “chat” facility was useful but should not have been the only means for Q&As. It is not something that all residents would use comfortably and showed a lack of awareness of the needs of different demographic groups in the community.

6.    The applicant did not display their plans elsewhere in the town. Expecting everyone to be able to read small architectural visuals or on the same digital footing in terms of accessing the online presentation fully was frustrating for some.

7.    Residents wanted to find out more about what the “Corporate Campus” would look like and explore the issues around the permeability to the town centre and from neighbouring residential areas. None of these could be explored in their image carousel. A large 3D model or printouts could have improved the legibility of the plans.

8.    Unilever’s involvement and potential jobs: Most residents in Kingston do welcome a major brand HQ moving to the town centre. In the middle of a pandemic and the consequent death of high street footfall, we can all see that this could be a major boost to the town centre and jobs. However, when we tried to find out more about what exactly Unilever’s  commitment is to this development or whether the land owner is using this as a land speculation exercise we did not receive any reassurance. This raises serious questions. Unilever is already committed to a long lease on Lever House. We know that that Unilever has been moving their staff around Surrey for over a decade and they left West Drayton and Richmond for Leatherhead in 2013.  So the question is are they contractually committed to relocate more jobs to Kingston and, if so, for how long? Is there a NDA in place that restricts the Council from talking to residents? These are all legitimate questions to which the consultors failed to respond. We understand corporate moves are complicated but it would have been nice if the questions surrounding Unilever’s involvement were properly answered given the importance to the town and the fact that the Leader of the Council came out so strongly in favour of the proposals.

9.    The applicant failed to explain how they arrived at a 22-storey idea in the first place. Surely after the colossal fight local residents mounted against St George’s and British Land only a few years ago, officials at the Council should have been aware that local residents have no appetite for another overdevelopment on their doorstep.  When asked, the applicant could not confirm on which planning policy document their proposal was based, but they told us it was approved by “the Council” at the pre-planning stage in March. This seems unlikely, when the entire country was shut down with Covid? From the pre planning advice it would seem a letter from you as the Head of Development Management has led them down this path.

10.    If it goes ahead this development will be one of tallest buildings in the borough, one to match the Tolworth Tower. From what was exhibited, visitors could see little consideration to mitigate any wind speed or turbulence or the overshadowing effects on the immediately surrounding housing, most of which is in a conservation area. This is something heavily explored only a few years ago around TOPO tower and that is 30m lower in height than the proposal here.

11.    Around the same time as this application, the ‘Arc of Towers’ concept was presented by the Surrey County Hall developers. Clearly the entire area now is being seen as a “tower building opportunity” by developers. Far from being a symbol of sustainability, the evidence across the London points to a highly problematic urban typology and an absence of happy neighbourhoods. Kingston residents are aware of the many problems with tall buildings, on social, economic and ecological grounds and firmly do not want the same in their in their town.

12.    Design and density are important areas properly explored by heritage and planning focused groups. However, residents’ comments mostly focused on how the development is so out of character with the adjacent conservation areas and how detrimental its effect will be on immediate surroundings. People just could not understand how this could even be seriously considered? Surely, the Council  could see the proposed tower will rise above the historic skyline, spoiling the view from the market square and other key locations?

13.    There are many unanswered infrastructure questions. The consultation largely ignored or did not understand the need for and impact on parking, transport, infrastructure and local services. There was no provision within the proposals for a strategic transport and services solution.

14.    In respect of the Hosgmill River and sustainability questions, there was no obvious answer to street permeability, wind tunnel and sun/light issues around the Hosgmill. How could this development claim to be sustainable whilst demolishing an existing concrete building to rebuild a 22-floor luxury tower block? Large buildings come with a huge environmental cost, despite our best efforts to offset CO2 and use more environmentally-friendly materials. While the project may meet some sustainability requirements, small landscape adjustments and creating a slightly better river bank will not be enough to offset the damage created by demolishing an existing concrete building to the ground.

15.    Housing – affordable housing is an extremely strong concern for residents but is always used as a weapon against residents by developers and the Council. In our experience, residents rarely say no to truly affordable housing. Residents’ scepticism is based on past experiences with similar developments. No sane person believes that Kingston’s housing needs will be addressed by more luxury gated developments with prices far in excess of those which most residents could truly afford.

In the SoC report, the applicant refers to a “stock response” by residents. We find it amusing that when neighbours collaborate on how to respond to a complex planning application, we are equally fed up with the “stock response” when we raised the affordability issue with their almost identical viability report response. The widely-held belief is that this type of riverside development will never be truly affordable to any local resident but does generate a healthy profit margin for the developer.