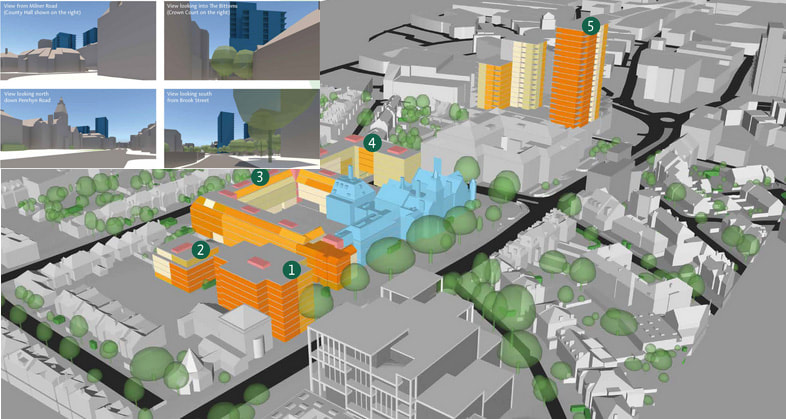 Our initial response to developers:

1. What does the community gain from these proposals?

Developers still do not seem to know or propose any worthwhile idea on how to use the main County Hall (a High heritage Significance Building) for the community.

Finding the new purpose of this very important historic gateway site should be at the forefront of any developer’s plan and should not be left as an afterthought – and it is where this consultation fails most. We would like to know if there was any public consultation on how to take this building further? Why there was no proper community/resident consultation with local residents about the future of this site?.

Without addressing the central issue – the core purpose of the building– this development will never get full public support.

2. Two applications presented as one is very confusing:

We believe that, although these proposals are presented as a single development proposal, it is clear that this consists of two separate applications. Regardless of the ownership argument presented in developers webinar (8th Sept), from the Penrhyn Road side, the two sites appear and impact on two totally different neighbourhoods.

We found that “mixing the re-purposing of historic county hall whilst demolishing a car park to replace with tall building clusters on completely different site” confuses residents’ understanding of the proposed plans and does not help anyone in these discussions.

3. Tower Block Clusters proposed are not supported by planning document:

Developer's claim of an “emerging tall buildings arc”around Surrey County Hall is news to residents. There has been no local planning document, policy, consultation or public knowledge supporting this idea and we would like the developer to substantiate this argument.

Where is the planning or policy document supporting a zone of tall buildings on the Thames Riverside? Trying to be as tall as the “St George’s Tower” is one the least convincing excuses any developer could have provided and it cannot be accepted by local residents, most of whom vehemently opposed the St George’s redevelopment at the time.

The proposed towers would be a competing and dominating presence within the setting of a valued heritage asset, which is visible from numerous viewpoints within residential Conservation Areas, as well as other sites of historical significance such as the Old Market Place.

4. Tower clusters of up to 17 floors on the Bittoms Car Park site is unacceptable

We acknowledge that the developers are trying to create housing units by creating differing block heights, but we do not believe the ad hoc design style would mitigate the adverse impacts resulting from the height, scale and massing of the 17 floor tower blocks proposed at Bittoms Car Park. Surely the developer knows there are 3 Conservation Areas close to the application site. The proposed tower blocks cluster would harm the character and appearance of the area and protected Thames views by their height, scale and massing. It should also be noted that these blocks would be adjacent to another proposed tower block, on the Unilever site, as well as a further tower block currently in development at The Royal Exchange site.

5. Where is the Historic England support as claimed in by developers?

Developer mentions that they have the “support of Historic England”. As residents we would like to see the proof of Historic England’s ‘blessing’ of 17 floor building clusters as argued in your presentations. We do not believe any heritage organisation would support tower blocks obscuring and dominating views of the Arcadian Thames. In the next stage of this process residents would like transparency and honesty in their communications with local and national heritage organisations and their response.

> developers should immediately start working with local residents and develop a vision before proposing a certain number of floors! Kingston University is not a single entity and does not represent local voices alone. This site is an extremely important asset and should be treated as one.

If you agree you can send your comments to developers here